The weather is warming up, and the days are getting longer. Certainly, that 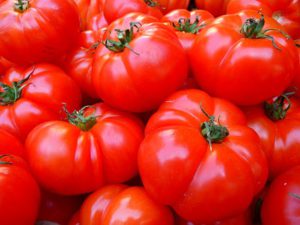 must mean summertime favorites like tomatoes, corn, and watermelon should be appearing at your favorite farmers’ market or produce stand.

Learn how to find the best tasting, local produce below!

By far the number one question I get at the beginning of the season is “why don’t you have tomatoes?” After which, I am happy to answer “because they aren’t in season yet.”

In Virginia, tomatoes do not become available until early July; and even then it depends on the weather. The same is true for other customer favorites, like corn and watermelon.

So why do so many produce stands and farmers’ markets have tomatoes, corn, and other mid-season fruits and veggies available in March? Simply put, globalization. 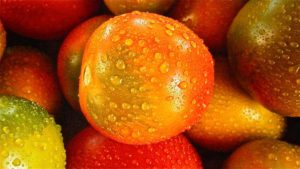 If all you want are tasty, vine ripe tomatoes; you may be wondering what globalization has to do with it.

The answer is everything.

Globalization, or the free movement of goods, services and people, is the reason we are able to enjoy pineapples in Maine, or January tomatoes in Viriginia. It has been great in some respects, as it has allowed countries to develop, groundbreaking and often lifesaving research to unfold, and food insecurity to reduce. However, it has also caused many folks to become unaware of where and how things grow. Additionally, it promotes the consumption of nutrient lacking fresh fruits and vegetables.

Who cares? You should.

Before a tomato lands on your counter, it is typically picked while its still quite 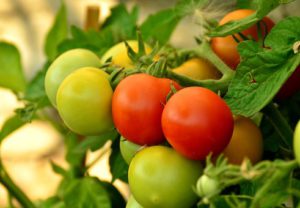 hard and green in Florida by a migrant worker, who makes about $1.25 per bushel (53 pounds), according to Barry Estabrook (2011) and Steven Greenhouse (2007) . The tomatoes are then loaded and shipped to a warehouse, where they are washed, waxed, and separated into cartons and onto pallets. The green tomato-like structures are then gassed with ethylene (the Ripening Hormone), and shipped to their final destinations (Estabrook 2011).

Gassed. The Ripening Hormone. What?

Ethylene Gas is a naturally occurring gas, produced by all plants. Essentially, it is what causes the fruit (i.e. the tomato on a tomato plant) to change color when it is fully ripe. Gassing in the manner described above, however, is not the same. It is a chemical reaction that simply changes the fruit’s color. The fruit is not actually ripe.

This is why folks often state “it’s hard to find good produce, anymore.” 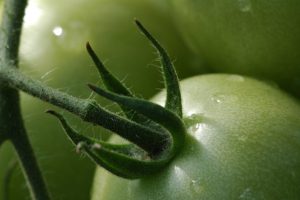 It is not so much that the produce is bad, as much as it has been pumped with nutrients to achieve a structure that looks similar to the food we want to eat, but then sadly picked, shipped, and gassed before it has time to finish acquiring all of its nutrients and subsequently ripen.

So back to the question: Why eat seasonally?

Seasonal food is fresher. It tastes better. It is more nutritious. Sure, globalization is absolutely wonderful in that is allows a family in poverty with no means to raise their own food to enjoy fresh fruits and vegetables year-round, when distributed properly. However, when you purchase your food directly from its farmer, you are able to enjoy the tastes of the season, and the nutrients it brings. Not to mention, you are helping provide for more than just your family.

Why Eating Local Food is Important

When you purchase something from a local, independent retailer, that person then uses the money to pay employees, purchase goods and services from other area businesses,  and support local organizations. In fact, most local business owners donate 250% more to non-profits and community causes, than box-chains (Watson 2017).

Eating local, seasonal food can also save money for its community.

Purchasing locally produced foods can reduce the amount of pollutants entering our system from all that travel, warehousing, and gassing mentioned earlier. Additionally, the United States Department of Agriculture (USDA) found growers who sell their goods directly to consumers tend not to use chemicals like pesticides and herbicides. This results in less fuels pumped and corrective measures taken to aid in the health of the environment. This can translate to reduced tax rates, energy bills, and medical treatments.

How to Eat Local in a Global Economy 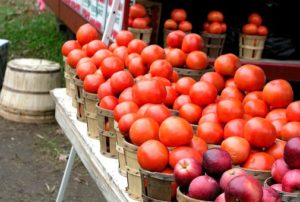 You may be wondering how to know if you’re eating locally, given the globalization factor I mentioned earlier. If so, awesome! You’ll be delighted to know the answer is simple….

Talk to your stand or market owner.

It may sound counter-intuitive that the person trying to sell you globally sourced, out-of-season produce is the person to talk to, yet they are.

Because they still know exactly what they ordered and where it came from. They also know why they purchased it in the first place.

Believe me, the person running your produce stand is not trying to get over on you. Rather, they are likely battling one of two things: 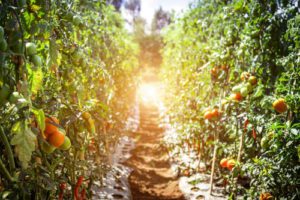 Anyone who has ever raised a garden knows, it is nearly impossible to raise everything your family needs, when you are the only one working the land. Gardening and farming are intense undertakings. While it can be incredibly rewarding and fun, the long hours, hard labor, and vulnerability to the weather are both mentally and physically taxing. This is the reason most folks in farming communities lend themselves to rearing commodity crops.

Commodity crops can be and are raised on large tracks of land, using large machines, pesticides, herbicides, and limited employees. This is the only way it is profitable. It is also a method unavailable to specialty crop (fruit and veggie) farmers. Thus, they must depend on their own efforts and even fewer employees, as the profit margins typically low. Needless to say, something that sounds so unappealing at face-value is not undertaken by many folks. Thus, limiting the humble farmers’ market or produce stand owner to whatever they can raise on their own or purchase from the few local specialty crop growers in the area.

Add to that national chains. 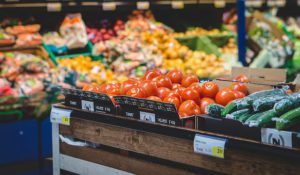 Remember our pal globalization? It is depended on upon national chains to stock their shelves. These stores access produce year-round, and sell it to folks who cannot or do not raise their own food. This detachment from the farm, results in a reduced in ability to recall and understand what is in season. It also results in customers who are unhappy with the taste of their recently purchased produce.

Once again, globalization it not all bad. In fact, it may be essential in allowing us to feed the world. But is feeding the world un-nutritious food the right thing to do?

I don’t think so.

Rather, I believe utilizing the vast knowledge gained by globalization the entire 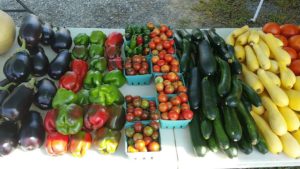 world can be fed via small family farms, gardens, and farmers’ markets much like FoodiO. What do you think?

Comment below on how you think the world can be better fed! Also, be sure to check out our official Seasonal Food Chart to learn when fruits, veggies, and herbs are in season in Virginia, and available at our market!